This Opposite Field Hitting Drills article was excerpted from our new book The Ultimate Hitting Training Guide (click link for book details). 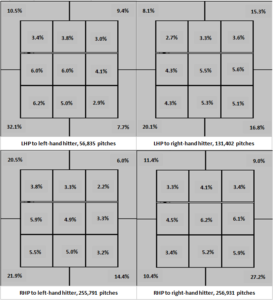 This opposite field hitting drill aims to increase the frequency of hard-hit balls by constructing a swing pattern that maximizes the margin of error for the most common location, the outside pitch (image left).

Making solid contact when timing is not perfect is the essence of maximizing the margin of error facilitated by opposite-field hitting.

Purpose – Significantly increase productivity by constructing the ability to hit the outside pitch hard to the opposite field.

Attention Focus – External Result focus (click link for how to use mental focus to improve training and performance) for contacting the outside pitch just past the front knee (inner zone). Inner zone contact occurs at rear elbow slot and outer zone at full extension.

Use a static heavy bag positioned just inward of the hitter’s front knee after stride completion (inner zone). Ask the hitter to move into hitting position and freeze. Next, the hitter drives their rear hip toward the opposite field gap and strikes the bag. Check the back knee is pointing towards the opposite field gap, and the rear elbow is slotted tight against the hitter’s side – this is the optimal outside pitch (inner zone) contact point, with the shortest time to contact and room for error on off-speed. Ask the hitter for 25 piece-by-piece swings into the heavy bag. 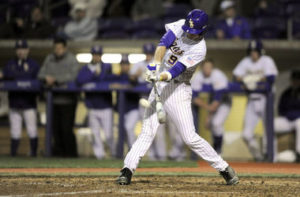 Next, reposition the heavy bag even with the hitter’s front heel. Ask the hitter to move into hitting position and freeze. The hitter drives their rear hip toward the opposite field gap and strikes the bag. Check arms are at full extension, and rear elbow is about six inches from the body. The back knee and hips are still facing the opposite-field gap (image above). The hitter does not fully rotate at contact. The arms and hands can’t release toward the opposite field (outward) if the hips and shoulders have fully turned in a different direction (inward). Continue to break the swing into pieces for 25 repetitions.

Now ask the hitter to do these same movements, striking the bag at first with elbow slotted and then at full extension (reposition the bag), but with no stops and very slowly, so that the entire swing takes at least five seconds. Do 25 slow repetitions for inner and outer zone. Check that the rear knee, hips, and shoulders continue to face the opposite-field gap at contact.

Lastly, swing at game speed, hitting the bag first with elbow slotted and then at full extension (reposition the bag). Do 25 slow repetitions for inner and outer zone. Check that the rear knee, hips, and shoulders continue to face the opposite-field gap at contact.

Some successful opposite-field hitters rotate no further after contact with the outside pitch; their core and shoulders remain in a half-rotated position during the follow-through. Other gap hitters finish their hip and shoulder rotation, but only after fully extending toward the opposite field gap. Building Rome Series recommends the hitter not complete rotation during the learning stages, ensuring the developing hitter maximizes error margin by releasing hands through the pitch path. Later, when they are more experienced, whether or not the hitter completes rotation during follow-through can be experimented with to best balance productivity and power.

An in-to-out swing path, where the barrel strikes the inner part of the ball, is essential. After slotting the rear elbow, the hitter releases hands out of their circular path, allowing them to extend away from their body towards the opposite field gap. Extension through the ball’s course hugely expands the margin of error, increasing contact rate, especially for off-speed pitches. Increasing HHB% (percentage of hard-hit balls) is the concept impelling opposite-field hitting.

Directions – Purposefully train with each of the following methods: 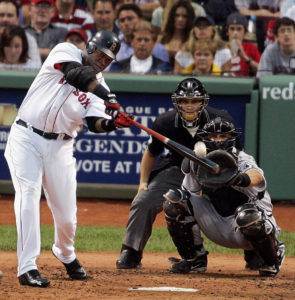 Use two batting tees. Position the first tee on the outside corner, just past the hitter’s front knee after striding (inner zone). Position the second tee ten inches away toward the opposite field gap (outer zone). Break the swing into pieces. Ask the hitter to gather, stride, and stop their barrel before hitting the ball off the inner tee; the rear elbow slotted, arms in power V, and front foot closed. Now ask the hitter to tap both balls off the tee, striking the inside part of each by straightening (extending) the arms and stop again just after contacting the outer ball. Arms still form a “V” and hands palm up, palm down (image left). Finally, the hitter finishes their follow-through, rolling over hands.

Practice 25 swings freezing between each swing piece, then 25 prolonged swings with no stops, and finally, 25 maximum effort swings. Repeat the two-tee drill for at least four practice sessions to gain the feeling for an inside-to-outside swing path with linear extension toward the opposite field.

Method 2 – Use an Obstacle

The second step for constructing an in-to-out swing path is to use an obstacle. Position a batting tee on the outside corner, just inward of the front knee after striding. Now position a vertical soft impediment, such as a rolled-up sliding mat, rug, or heavy-hitting bag, just behind the plate so that if the hitter fails to keep hands tight and slot rear elbow, the bat contacts the barrier. The obstacle forces the hitter’s back elbow to slot (against the hitter’s side) but allows arms to extend toward the tee. The hitter aims to contact the inside portion of the ball. Again take 25 stopping swings, 25 slow swings, and then 25 game speed swings for four training sessions.

A third useful training method for constructing extension is the “stopper” swing (the hitter stops the barrel at full extension). Use a batting tee positioned for optimal inner zone outside pitch contact (just past the front knee). Place a target net about twenty feet from the tee and toward the opposite field gap. Now ask the hitter to hit the ball into the net, but stop hands at full extension with straight arms, still in power V with no rolling over (image above). The hitter practices productive contact in the outer zone by smoothly releasing hands to the stopping point. The hitter aims to contact the inside portion of the ball. Ask the hitter for 25 hits into the net, each time stopping barrel as it points directly at the target.

For maximum benefit of stopper swings, the hitter swings naturally and releases hands, then quickly slows the barrel, and stops with the bat level to the ground. Most hitters are challenged at first to release hands and stop the barrel in this manner. Observing full extension in power V is an efficient way for hitters to build the feeling and habit of releasing hands.

Avoid creating the habit of pushing arms forward. For maximum bat speed, the arms “release,” they do not “push” forward.

Directions – Purposefully train with each of the following methods:

Begin by using a one-hand bat or choke up with one hand on the hitter’s own bat. Front toss from 10 feet to the outside corner. Place a net about 20 feet toward the opposite field gap. Take ten swings with one hand then switch to the other – do 60 total in-to-out swings. Count how many hits go in the net. To make this drill more fun and increase focus, set up an individual or team competition.

Next, return to a two-handed swing. Block practice opposite-field hitting using front toss to the outside corner. Place a net about 20 feet toward the opposite field gap. Ask the hitter to “let the ball get deep,” rotate 80% of full, and release hands toward the target net; the hitter slots rear elbow (in), then extends (out), striving to make contact with the inside portion of the ball. If the hitter continues to pull too many hits, ask them to 1) maintain lead shoulder into the plate slightly longer during ball travel, and 2) close up the front foot (30-degrees or less at contact). To complete, the hitter does 25 successful targets. Repeat at six future practices.

There is more to productive opposite-field hitting than merely letting the ball travel – stay closed, extend toward the opposite field, and drive the ball hard.

The primary objectives of Step 5 are to develop automaticity for:

Use front toss, machine, or live BP, mixing half inside and outside locations. Ask the hitter to target outside pitches into a net placed in the opposite field gap and pull inside pitches into a net set in the pull gap. Out of 50 swings, measure and track the number of hard-hit balls to the correct target (inside – pull gap, outside – opposite-field gap). At each upcoming practice, ask the hitter to beat their record. Or make a team competition.

Especially for developing hitters (who have been pulling all pitches for many years), opposite-field training can be challenging; they baseline a swing pattern and timing for the outside pitch, but they also automatically perform this pattern only after identifying outside location. Be patient but persistent when training opposite-field hitting techniques. Practice accumulates – the next practice shows improvement. If the youth hitter starts constructing gap hitting around age 12 and devotes a portion of every hitting practice to “going with the pitch,” count on them achieving exceptional productivity by high school.

Executing the inside-out path and letting the ball travel deep to the inner zone enables the barrel to quickly get to the ball. Reduced time to contact creates more decision time, exceptionally useful for movement pitches or with two strikes. Use a bat sensor with live BP to confirm time to contact is reduced by opposite-field techniques.

Method 3 – Compare Power for Inside vs. Outside Drill

Since opposite-field hitting emphasizes letting the ball travel further into the hitter’s body, early bat speed techniques are vital (see Tool XXII: Early Bat Speed Drills). Hitters strive to maximize early bat speed before releasing hands toward the opposite field gap. They gain “pop” in their bat even to opposite-field.

Begin by placing a static heavy bag just in front of the hitter’s stride foot, at the optimal inside pitch contact point (inner zone). Ask the hitter for maximum effort swings, striking the bag. Measure peak and average early bat speed with a bat speed radar or bat sensor. 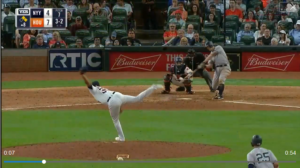 Use game-like competitive pitching, where the pitcher is trying to strike the batter out. The hitter gets three at-bats. Ask them to only think about seeing the ball and hitting the ball hard, nothing else.

Take a slow-motion video of each swing, from different angles, for a view of the hitter’s “true” baseline. Analyze the video to determine if opposite-field fundamentals are automatic (matching image above). If not, refocus on further purposeful opposite-field practice using previous steps in this drill.