Swing With a Steady Head Drills

The Swing With a Steady Head Drills article is excerpted directly from ur new book The Ultimate Hitting Training Guide (click for book details).

Unlike MLB Mike Trout (above), for simplicity and confidence building, developing hitters and many experienced players should maintain their head as steady as possible, given the hitter’s aggressiveness of stride and approach. The hitter’s head must move forward as they stride out. But the hitter strives to stabilize all head movement except for this linear movement – no lowering of shoulders as they transition into hitting position.

Purpose – Maximize vision as the approach executes and the hitter swings.

Attention Focus – Internal focus (click for how to use mental focus to improve practice and performance) on maintaining a twenty-degree spine angle from stance through swing completion. 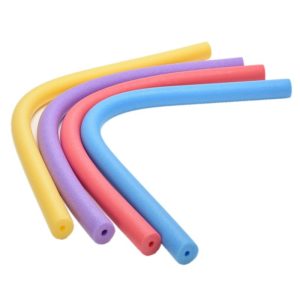 Use dry swings. Ask the hitter to take their stance with a twenty-degree inward lean (spine angle) as in the above image. The coach places a long foam noodle, level with the ground, and pointing at the pitcher, against the front of the hitter’s helmet. Now the hitter executes their stride and approach, stopping in hitting position. The hitter’s helmet should slide lightly along the noodle as they move forward. If the hitter’s head drops or pulls away from the noodle, they are changing spine angle; eyes are moving too much. Repeat until the hitter acquires the feeling of maintaining a twenty-degree spine angle beginning in stance and through stride and approach.

Here are the potential problems:

Now use 25 dry swings but with no noodle. Ask the hitter to take their stance with a twenty-degree spine angle, move into hitting position, and freeze. The coach watches from a front view as the hitter moves. The hitter’s head should remain in precisely the same spot (pin head to a backdrop), as seen from the front. The hitter observes themselves, are they slightly bent at the waist with weight mostly over toes, and head nearly over the interior batter’s box line (athletic). Repeat until the hitter acquires the feeling, with no noodle for help, for maintaining a steady head as they move out of their stance to toe touch.

Finally, use a tee or front toss. Beginning in stance with a twenty-degree spine angle, the hitter moves slowly, at first, into hitting position and then swings. From the front view, the coach again pins the hitter’s head against a backdrop. As the hitter gathers, strides forward, and swings, only forward head movement—no movement in, out, up, or down. Block practice maintaining a steady head for 50 swings. Measure and track the number of successes. Try to beat this number at the next practice.

For preparation to accumulate, it must be performed routinely over some time. 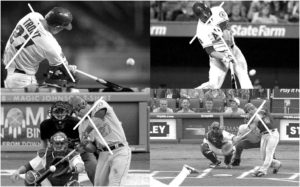 A stable 20 to 30-degree spine angle during core rotation results in a steady head; to maximize torque, shoulder rotation and swing path are 90 degrees to the spine’s inward angle.

To simplify, developing hitters should assume a 20-degree spine angle in their stance. Often experienced hitters, to gain rhythm and momentum into the swing, transition to this more athletic posture as they move to launch. Universally, spine angle in hitting position is 20 to 30-degrees (upright is 0-degrees). Then, as the hitter rotates, spine angle remains stable. A stable spine angle during rotation is critical for vision, balance, and a reliable swing plane.

Purpose – Form habit for a stable 20 to 30-degree spine angle during rotation of hips and shoulders.

Attention Focus – Internal focus (click for how to use mental focus to improve practice and performance) on remaining athletic as the hitter swings.

Step 1 (Get the Feeling)

Use dry swings for this step. Ask the hitter to assume their stance with a 20-degree spine angle. Now place a long swimming pool noodle lengthwise against their helmet. Ask the hitter to move into hitting position and then stop, keeping their helmet sliding along the noodle as they stride forward to toe touch. Execute 25 proper repetitions.

Now the challenging part. Ask the hitter to hit the ball off a tee with an “A” hip rotation (see Drill I) while maintaining their head against the noodle through swing completion. To maintain a stable spine angle during the swing, the hitter replaces the forward bend (posture) with torso side bend (sideways lean) as they rotate hips and shoulders. Ask the hitter to slowly execute a static spine angle and then 50 times at game speed.

After the hitter has achieved a degree of feeling (aided by the noodle), now use a static heavy bag placed even with the hitter’s front heel after stride completion. The hitter takes a full swing and hits the bag, then freezes and observes whether they have a 20-degree side bend. Ask the hitter for five correct executions in a row.

Many young hitters (and golfers!) straighten up, “pulling their head,” where the hitter moves into a more upright posture (decreasing spine angle) during the swing. A pulling head negatively affects swing path, balance, and vision.

Here are two issues which cause head movement during rotation:

Use a static heavy bag or batting tee to begin. Ask the hitter to move into hitting position with a twenty-degree spine angle, plant front heel and block front leg, and freeze. The coach pins the hitter’s head to a backdrop from a side view and then a front view. Ask the hitter to start their rotation, leading with hips, and finish their swing. Check that the hitter’s head remains perfectly still. Now remove the pause at heel plant, swinging slowly, then game speed.

Once the hitter’s head remains static for at least 25 swings at four practices, move on to front toss, pitching machine, or live BP. Ask the hitter for 100 purposeful swings with a steady head during rotation. Routinely perform this exercise until a steady head as rotation executes becomes a part of the hitter’s baseline.