In this “mental approach” article, Building Rome Series will discuss three different approaches to change a bad batting habit to a more productive one. 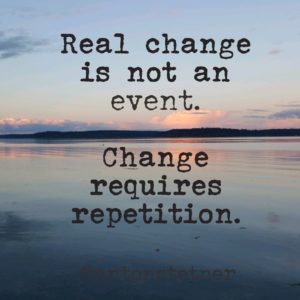 For most athletes, regardless of the sport, changing an old habit is a process. The same is true for baseball and fastpitch softball hitters.

The best scenario is the new hitting habit will increase in occurrence while the old habit gradually decreases. Rarely are new habits instantly formed.

But with patience and persistence, the hitter can eventually completely replace the old habit with the new.

The developing player can reach the challenging goal of being a successful hitter by changing one bad batting habit at a time.

This article aims to provide ideas for shaping the process of change to be as effective and efficient as possible!

The Obstacles to Change 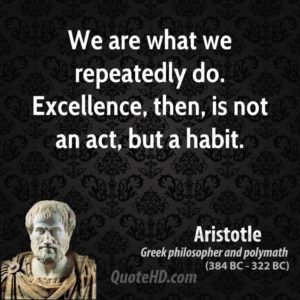 Trying to break old habits can raise the frustration level of any athlete.

Coaches and parents can help the developing hitter stay patient and trust the training process. This can occur when the hitter is conscious of the obstacles they face.

Here is what they up against to change a bad batting habit:

But that doesn’t mean it is the most productive and consistent way to hit.

Feel is not always real!

The intention of the athlete is the driving force that regulates all movement. This why it is crucial hitters have productive concepts.

“Habits are hard to break. Myelin cannot be un-insulated. The only way to change them is to build new habits by repeating new behaviors — by myelinating new circuits.”

When a hitter is trying to improve, they could either:

To be a high average hitter requires the ability to make quality changes and, at the same time, produce consistent performances. 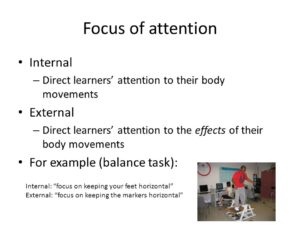 Baseball and Fast Pitch Softball hitters can use an internal focus (click for a description of various ways to focus during practice and games) to change their habitual movements. Then repeat the change until it is ingrained and automatic.

Changes to physical habits require constructing new myelin circuits (click for how to train your brain for improved hitting). Utilize an internal focus to:

Breaking the skill into small pieces and starting slow (see “A Precise System” below).

Break the swing or new technique into small parts (stance, rear weight shift, stride, separate hands, lead with hips, …) and practice each part slowly and accurately. It’s not how fast you can do it. It’s how slow you can do it correctly. As with any skill, the athlete must be able to do it slow before they can do it fast.

Breaking the skill into pieces and practicing each piece slowly at first is essential for learning most anything. However, hitters often forget these points and continue to practice their full swing at full speed with the same old habits.

Linking the pieces together in progressively larger groups (see “A Precise System” below).

As hitters begin linking pieces together to complete their new swing habit, they will feel good about their progress. The process of linking pieces helps hitters realize that while setbacks may occur as pieces are added, constant progress is being made toward the goal. Additionally, as each new piece is added, the hitter gains feeling for how energy transfers up the kinetic links.

Taking away the result.

The hitter is striving to improve specific movements. Nothing else matters!

Focus is key during this stage of training. Most hitters make technical changes inefficiently. Their attention focus is split between the desire to make a technique change and the desire for a good result (solid hit). These two focuses, internal body movements, and external results, often do not mix well.

First, take away the result. Then, gradually bring it back as the new movement becomes increasingly ingrained.

A Precise System to Change a Bad Batting Habit

The process of internalizing hitting fundamentals, or any sports-related movement, is quite like learning a musical instrument. Here is a precise system that works well for musicians faced with learning a new song:

Step1 – Divide the song (or swing) into smaller pieces.

Step4 – Practice the first and second small pieces together slowly.

Step5 – Practice the first and second small pieces together at speed until it flows smoothly and is performed correctly.

Step7 – Practice the second and third small pieces together slowly.

Step8 – Practice the second and third small pieces together at speed.

Step10 – Practice the first, second, and third small pieces together at speed.

Continue adding one piece at a time until the entire swing or new technique can be done fluidly and at speed. 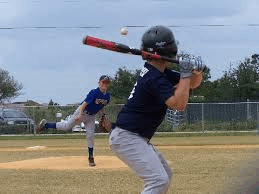 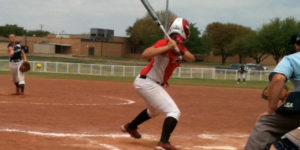 Perception and action are coupled (click the link for how to train the hitter’s brain scientifically) in live games, so it is essential practice plans frequently include simulated game at-bats.

Make practice as close to game-like as possible. Incorporate the reality of a competitive pitcher trying to strike out the batter. A competitive environment stimulates the development of the hitter’s perception of various types and locations of pitches and the action required.

Boost the developing hitter’s rate of improvement by frequently simulating the game environment in practice. 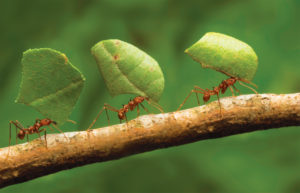 Utilizing environmental constraints (click link for how to use constraints to enhance practice) is an incredible and fascinating coaching scheme. Simply put, manipulation of the environment will shift the intention of the athlete and can literally force development in a specific skill area.

Here is an example. For more experienced hitters, reduce fair territory during batting practice and scrimmages by placing cones from home plate to left-center and home plate to right-center. Ask one outfielder to play the fair area and catch any fly they can get to. In addition, any ball landing inside the baselines are outs. Place a net in front of the pitcher. Any ball hit into the net is a foul ball.

These environmental constraints dramatically shift the intention of the hitter, requiring the ball to be driven hard on a line drive and gap to gap. With this external result focus, hitters will adapt to become very good at hitting the ball hard up the middle into the outfield. Count and record the number of base hits out of 25 swings to measure progress over time. Or, divide the team and make it a hitting competition.

Effective coaching can be seen in the manipulation of the training environment. Allowing your athletes to be free, athletic, and compete within that environment encourages positive adaptations and promotes developing a style that is most productive for the individual hitter.

The coach can use their imagination to add environmental constraints to any drill. Create drills that require bat speed, driving the ball deep, hitting to all fields, adjusting for off-speed, recognizing the off plate movement pitch, or whatever the hitter’s goal is, and challenge hitters.

What the hitter thinks they do is often not what they actually do. Feel is not always real.

A patient hitter who is able to realize what is difficult today becomes easy tomorrow can overcome many obstacles.

Sometimes there is regression. Often a hitter may feel like they go back three steps to go four forward. Players who are not willing to make that sacrifice often stagnate, never getting where they want. This is even truer the more ingrained a swing is.

Remember, the hitter can sometimes be performing their worst when they are learning the most. This is vital to understand if the hitter is to improve and reach their potential.

If the hitter is to make a change to their swing, it must feel dramatically different. Normally, if it doesn’t feel strange, vastly uncomfortable, or just wrong, the hitter is probably not changing enough.

“Initially, the new way feels very strange and awkward because you are moving against old habit. But in a short period of time, through deliberate repetition, the new way feels normal, and moving back to the old way would feel strange.”  (The Talent Code: Greatness Isn’t Born. It’s Grown. Here’s How, by Daniel Coyle.)

The brain will try to direct the body in old, tried, and tested patterns. But each time practicing the desired new movement or result, this state gets a little weaker. Eventually, this state “snaps,” and the hitter is free of old unproductive techniques.

New habits are formed by routine practice. For the average athlete, 60 times per day, 21 days to a new habit. Enjoy the quest and the rewards!