This Optimizing Launch Angle article is excerpted from our new book The Ultimate Hitting Fundamentals, Techniques, and Strategy Guide (click for book details).

Building Rome Series recommends youth hitters under 12 years of age concentrate on building Universal fundamentals, have the intent to swing hard in games, and go from there. Once the hitter’s overall bat speed is at least 50 mph for baseball or 45 mph for fastpitch softball, consider beginning launch angle training. Before reaching high school age, all hitters need to understand the launch angle and exit velocity metrics and how they relate individually, based on the type of hitter and competition level.

Let’s begin by examining each of the variables which determine the trajectory and distance a hit ball travels:

Offset is the vertical distance between the centers of the ball and bat at contact.

Centerline angle is the line connecting the centers of the ball and bat at contact. “Squared-up” collisions are those where the attack angle is just under the centerline angle (as in the image above). Near-optimal energy transfer from bat to ball, with some backspin, maximizes ball travel distance.

Attack angle higher (more upward) than descent angle is typical of power hitters. With a 75+ mph (baseball) or 65+ mph (fastpitch softball) ball exit speed, this is a home run!

Launch angle is a vital topic for experienced baseball and fastpitch softball hitters. Many coaches, parents, and players remain skeptical of the term, relating it to popping up or flying out. Others think launch angle is only relevant for home run hitters striving to hit for maximum distance. But there are other definitions of “optimum” launch angle besides maximum distance. The chart (below) highlights the tradeoffs between maximizing batting average vs. slugging power depending on launch angle. 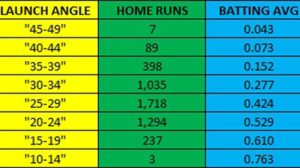 All hitters need a basic understanding of launch angle and exit velocity metrics and how they relate individually. For example, let’s look at balls hit with launch angles in the range of 20 to 30 degrees as a function of exit velocity. At low speed, we have bloop singles, at high speed, home runs, and in between, an easy fly ball out.

The most productive launch angle for each hitter is highly dependent on their ball exit speed (see The Ultimate Hitting Training Guide, Stone XXIII: Measure and Track Ball Exit Speed). The coaching concept is not to prescribe the exact attack and launch angles for all athletes. Instead, specify ranges based on exit velocity.

When the data from a swing analyzer displays a negative attack angle, it may be the hitter is very late. They may be contacting balls too deep in the zone before the bat has begun the upswing. It’s important to remember that the swing path is a downward and then upward arc.

Attack angle is dependent on the point of contact.

The moral is, be sure not to evaluate attack angle until the hitter has the right timing and is making solid contact towards the middle of the field.

Swinging down (negative attack angle) produces tremendous backspin (see Debate XVIII: Backspin) when contact occurs below the centerline. However, any carry gained from the extra backspin is small compared to the distance the hitter loses by cutting down through the ball, reducing energy transfer and ball exit velocity (see Dome XII: Swing in the Plane of the Pitch).

There is more to the swing plane than vertical angles. The barrel’s direction through the horizontal plane is also central to ball travel distance and productivity. When the bat is colliding with the ball, the horizontal bat path is either in-to-out, out-to-in, or somewhere in between. When the hitter puts a spin on the hit, causing the ball to curve and lose distance, the barrel has struck a “glancing” blow. To maximize ball exit speed, the swing and extension path is through the pitch’s location.

Hitters should develop the skills and habits to work through the zone in-to-out and drive the ball to the middle of the field (see Dome VIII: Barrel Inside Pitch/Hands Tight for Productivity, and Dome IX: Gap Hitting).

“There has been a shift in philosophy so dramatic it can safely be called a revolution, with more hitters, armed with better and more extensive data than ever, reaching the conclusion that not only are fly balls on average, better than grounders but that the latter are to be avoided at all costs.” (These days in baseball, every batter is trying to find an angle, 2017)

“There is room for plenty of old school philosophies in baseball, but it is time we quit teaching “swing level” and “put the ball on the ground and make them throw you out.” Players do not get scouted and drafted based on their ability to ground out and move runners the hard way; they get to “the next level” by showing that they can hit for, not only average but also for power.” (Guthrie, 2019)

Here are key concepts and intentions for optimizing attack and launch angles to fit the player:

Optimizing Angles by Experience and Type of Hitter

When assessing hitters, learn their bat and ball exit speed, average attack angle, and average launch angle and then build a program to bring them into sync with the type of hitter they are or want to be. Finding their optimal swing plane should be on the radar of every hitter high school and above.

The optimum attack angle, as pertains to youth baseball and fastpitch softball, is problematic.

Therefore, Building Rome Series recommends beginning hitters not to worry so much about angles. Instead, concentrate on building sound fundamentals, have the intent to swing hard in games, and go from there.

So, what about the preferred attack angle for our developing hitter? Here is one opinion:

Are ground balls always unproductive? Not necessarily. The harder the hitter drives the ball (ball exit velocity), the more chance they will get on base no matter their attack angle. But as the hitter advances past 12U and the infielders don’t make as many errors, arms get stronger and more reliable, cover more area, and field conditions improve, negative launch angles are usually gobbled up.

A downward, or for that matter, even a zero-attack angle swing (level to the ground), dramatically reduces the rate of contact when the pitch is consistently arriving at a downward angle of 15 degrees or more. Conversely, an attack angle level to the pitch (+15) leads to a high rate of squared up contact, but due to the moderate ball exit speeds at this age, these are fly ball outs. So, what attack and launch angles should the developing hitter strive for? A compromise is best:

For the developing hitter averaging between 40 to 55 mph exit velocity, adjust the attack angle to about +8 degrees and average launch angle to +13 degrees. The launch angle generated by this attack angle is most productive, leading to line drives landing in the outfield while at the same time constructing a swing path to dominate at higher levels of competition.

Building Rome Series believes a roadblock to the hitter’s progress occurs when a developing hitter tries to hit ground balls to get on base. Becoming a ground ball hitter does little for their future. Don’t cut corners for expediency, only to have to reprogram the hitter later. Instead, introduce launch angles during the fundamental teaching phase of training. Using launch angle markers in your practice area (see The Ultimate Hitting Training Guide, Stone XXV: Measure and Track Launch Angle) helps your hitters visualize the eventual goal and begin to adjust their intentions.

Power Hitters (Baseball and Fastpitch Softball) – High School and Above

For high school and above power hitters, with an average ball exit speed of 75+ mph (baseball) or 65+ mph (softball), the highest home run probability requires swinging with a +15 to +20 attack angle and a 25 to 30-degree launch angle. But there is a penalty for the larger attack angle utilized by homerun type hitters. When the attack angle is high, the batter is no longer swinging level with the pitch’s trajectory. Because the swing path is at more of an upward angle than the ball’s descent angle, when timing or aim is slightly off, a swing and miss, a high fly out, or topped ground ball results – the margin of error is reduced. The rate of hard-hit balls declines, and strikeouts increase. The high school power hitter must be committed to their homerun strategy.

Gap Hitters (Baseball and Fastpitch Softball) – High School and Above

The following objectives optimize productivity by increasing the rate of hard-hit balls (QAB%) and maximizing extra-base hits. The hitter still hits home runs when their aim is slightly under the ball.

Contact Hitters (Baseball and Fastpitch Softball) – High School and Above.

The level to the ball, in-plane swing, is one where the attack angle coincides with the descent angle of the ball (see Dome XII: Swing in the Plane of the Pitch).

Such a swing is very forgiving of errors in timing. If making solid contact at the highest rate is the primary goal, minimizing strikeouts, then swinging level with the pitch plane is the best strategy. When the hitter “barrels up” the ball, low trajectory singles are the typical result. When their aim is a little off, doubles to the fence (contact a bit more towards the bottom of the ball) or hard ground balls (contact a little more towards the top of the ball) are standard. Depending on exit velocity, home runs are typically rare. Striking the ball so far below the centerline (large offset), necessary to produce the higher launch angle to carry over the fence, loses a lot of energy during bat-ball contact. For most hitters, a low attack angle and high launch angle is usually a fly out.

How to Train Attack and Launch Angles