This Load Hands Outside the Toe Line to Reduce Time to Contact? article is excerpted from our new book The Ultimate Hitting Fundamentals, Techniques, and Strategy Guide.

Our dedicated Roman Senators are back in session. Rome’s citizens much appreciate the Senate members due to their ability to keep an open mind and make well thought out rulings benefiting all levels of ability. Senators comprise a group of respected players, coaches, and sports scientists elected by the Roman citizens. The purpose of the Roman Senate is to review and debate contending hitting strategies and viewpoints. The Roman Senate seeks to raise knowledge to beget increased success. After each debate, the Senate issues a ruling.  The ruling contains recommendations, proclaiming increases in power or productivity.

One of the Roman Senate “short to the ball” (click for a debate about whether a short swing equals a quick swing) advocates objects, their cries echoing in the chambers. The dedicated Senator disagrees with recommendations made in our article Where and How Hitters Load Hands. Hands never load that far. Hands should load outside the toe line, more inward toward the plate, creating a shorter swing. Where hands best load is oft-debated.

The time to contact metric (provided by bat sensors) measures the time, beginning when the barrel starts to move towards the hitting zone (at launch) until the bat reaches the ball. Time to contact is affected by the degree of early bat speed, the swing arc radius, and where contact occurs, inner zone (deep) vs. outer (out front).

Time to contact is the primary indicator of quickness.

Identify Loading Hands Inside, On, or Outside Toe Line 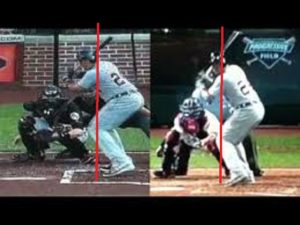 Outside Toe Line – Both hands seen and no rear elbow 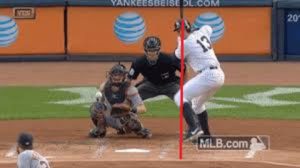 Here are two expected benefits asserted by outside the toe line advocates:

Coaches who teach shortening the loading of hands outside the toe line proclaim this method reduces or eliminates the problem of spinning out. The hitter is less likely to cut off the outside corner with the swing path. They believe the rotational impetus of the upper body and hands from a more fully loaded position (inside the toe line) is the culprit, causing the spinning out.

Even though most competitive hitters load hands on the toe line, Senators often teach youth hitters to shorten the swing. In the interest of guiding hitters toward high school varsity, college, and pros, this situation forces the Roman Emperor to step in and issue an overruling proclamation:

Developing hitters should learn to load hands on the toe line until they are stronger and more experienced. Then experiment with other loading locations and methods.

The Emperor vetoes the Senate consensus based on these observations:

When hands load outside the toe line, arms and hands do not kinetically connect to the rotating core and shoulders until late (see Pillar XXII: Arms and Hands Connected). When hitters more aggressively load hands, they feel the earlier pulling action. Energy is transferring from shoulders to arms earlier in the swing boosting early bat speed. A reduction in early bat speed (see Stone XXIII: Bat Speed) generally results when hands load outside the toe line. Use early bat speed and ball exit speed measurements to objectively confirm.

Loading hands outside the toe line put the hands very close to hovering over the strike zone’s inside corner as the swing begins. It is challenging for developing hitters to maintain the barrel inside the ball’s path from this load position. Inexperienced hitters are usually around the ball, consistently pulling the inside pitch foul.

“Keep your hands still … not too much movement … dead hands … as you stride, hands don’t go back … no inward turn … keep hands in front of the rear foot.”

Sometimes coaches are too afraid of movement. Most great hitters have strong natural tendencies for rhythm in their arms and hands. They know what it feels like to throw a ball for long-distance. Don’t teach the athleticism out of a hitter without first objectively measuring power and productivity (see Drills below).

Early bat speed is a time reducer, more than making up for any slightly longer movements. Improvements in early bat speed allow the hitter more time to make a swing decision before committing, less likely to be late on the inside fastball, and more productive on off-speed and movement pitches (see our article Debate XV: Short Swing Equals Quick Swing?). Use the time to contact measurement from a bat sensor to verify how quick the hitter’s swing really is.